Season 55 is filled with NINE exciting shows,
brimming with THEATRE MAGIC!
Magic can be a bit frightening - but it can also be a lot of fun! 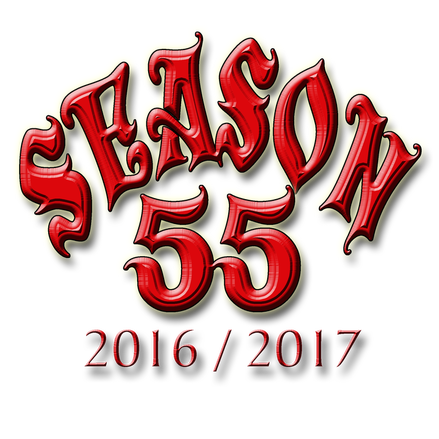 Spotlighters tackles a variety of genres, and takes our audiences on some dark travels into the world of politics, feuding families & neighbors, gossipy friends, crime, murder and Dungeon & Dragons.
Audrey Herman always believed that theatre was more than entertainment, that it should provoke an audience.  This season may frighten you, it may also bring you to tears (sadness and joy) and give you cause to wonder about the humanity around you.
This season also challenges the Spotlighters organization as we begin the process of developing our new home.  It will be a year of fund raising, and many decisions and plans about our new home.
I am  excited about the possibilities that a new Community Arts Center will provide for Spotlighters and for the Baltimore community.  A larger theatre with the same intimacy and closeness, so you are always, “part of the action” and a new second theatre, and more room for education and community programs.
When I look back at the great work of Spotlighters since 1962, I remember that Audrey was focused on bring quality theatre to the community and keeping an open door for new talent - actor, technician, designer - to walk in and see that this “the-a-ter thing” was all about.  Spotlighters continues to be a teaching theatre offering students of all ages a chance to experience theatre.
This year Spotlighters will need your support as we begin the transition process, if you want to be more intimately involved, please contact the theatre about the many opportunities to assist with production operations, or with our Capital Campaign.  Spotlighters is made from the very fiber of the Baltimore community, and you are what gives the theatre its breath.
Join us this year, as a patron, as a subscriber, as a Donor, as a Partner — I promise you, the magic is real at Spotlighters!   And to our continued supporters, our family - thanks for the years of generous support, and for joining on this magical (fun & frightening) journey!
SHOW TIMES:
Friday & Saturday at 8:00pm;  Sunday at 2:00pm - TEN SPOT Thursday at 8:00pm
ORDER your FLEX SUBSCRIPTION now ---  Special Discounts until August 31, 2016! 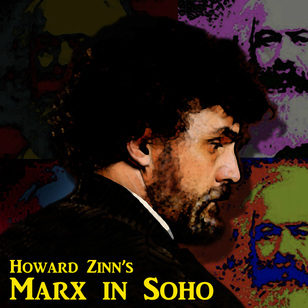 Marx is back! The premise of this funny, witty and insightful “play on history” is that Karl Marx has agitated with the authorities of the afterlife for a chance to clear his name. Through a bureaucratic error, though, Marx is sent to Soho in New York, rather than his old stomping ground in London, to make his case.
Howard Zinn, best known for his book, A People’s History of the United States, introduces us to Marx’s wife, Jenny, his children, the anarchist Mikhail Bakunin, and a host of other characters.
Marx in Soho is a brilliant introduction to Marx’s life, his analysis of society, and his passion for radical change. Zinn also shows how Marx’s ideas are relevant in today’s world.
Featuring Phil Gallagher as Karl Marx. 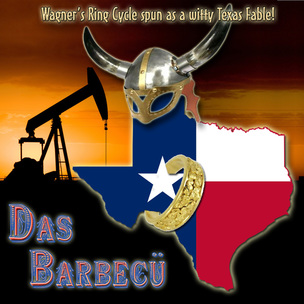 Wagner's Ring Cycle is spun as a witty Texas fable with five actors playing more than 30 outrageous characters at breakneck speed. Songs run the gamut from Broadway to Texas swing, from jazz to twangy country and western. Mismatched lovers who meet on the day of their shotgun double wedding, three generations of feuding families, a magic ring of power, wild west lariat tricks, a synchronized swimming revue, a song and dance tribute to the joys of guacamole, and the sweetest two step ever to slide across a stage add up to wild comedy.
​
"Your sides will ache by the end of the fast paced country western musical comedy." - Variety 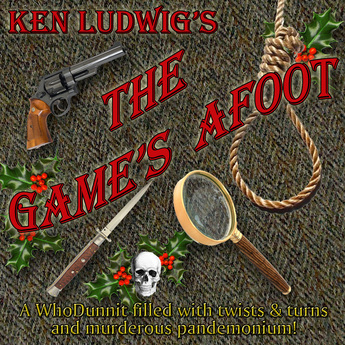 THE GAME’S AFOOT
(or Holmes for the Holidays)
by Ken Ludwig
directed by Fuzz Roark
with Danny Romeo
Nov 18 - Dec 18, 2016

Winner - 2012 Mystery Writers of America Edgar Allen Poe Awards – Best Play!
​
It is December 1936 and Broadway star William Gillette, admired the world over for his leading role in the play Sherlock Holmes, has invited his fellow cast-members to his Connecticut castle for a weekend of revelry. But when one of the guests is stabbed to death, the festivities in this isolated house of tricks and mirrors quickly turn dangerous. Then it’s up to Gillette himself, as he assumes the persona of his beloved Holmes, to track down the killer before the next victim appears. The danger and hilarity are non-stop in this glittering whodunit set during the Christmas holidays.

“An inspired whodunit…a snappy, clever drawing-room mystery. There are twists . . .that cause the audience to gasp.” - The Cleveland Plain Dealer

​A WhoDunnit with twists & turns and murderous pandemonium! 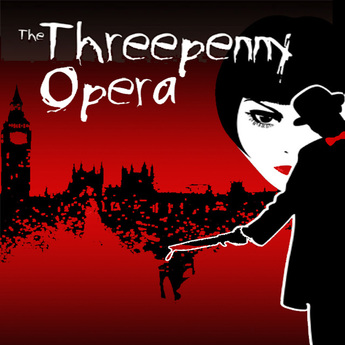 Brecht and Weill turned to John Gay's 18th-century The Beggar's Opera to fashion this savage, biting commentary on bourgeois capitalism and modern morality. Set in Victorian London as seen through the lens of 1920s Berlin, a bitter tale is told of the predatory outlaw known as Mack the Knife. He secretly marries the daughter of Soho's underworld boss, but is soon betrayed by his sinister in-laws and sent to prison. After being freed by the police chief's daughter, he is again betrayed - this time by a prostitute - and sentenced to death. At his final hour a reprieve from Queen Victoria herself arrives, thus providing a menacing finale of ferocious irony. 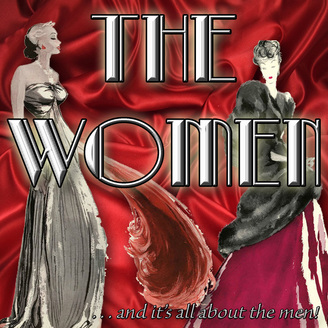 The plot centers on a 1939 group of gossipy high-society women who spend their days at the beauty salon and haunting fashion shows. The sweet, happily wedded Mary Haines finds her marriage in trouble when shop-girl Crystal Allen gets her hooks into Mary's man. Naturally, this situation becomes the hot talk among Mary's catty friends, especially the scandalmonger Sylvia Fowler, who has little room to talk.  But with a bit of guts and daring, Mary snatches her man right back from Crystal's clutches. Snappy, witty dialogue, helps send the humor over the top.

"I don't ask any man to understand me. How could he? I'm a woman." "The Women" is a satire of life behind the closed doors of women's culture. It exposes the indulgence of the wealthy who have been shielded from the worst effects of the Depression, but places them squarely in the midst of the class tension of the time. While working women in the play participate in skewering the Park Avenue ladies, all the ladies are keenly aware that regardless of class or race, one of the most lucrative and secure jobs available is that of "wife," and they do it with sparkling, witty, and clever dialogue.​
An all female cast!
. . .  and it's all about the men! 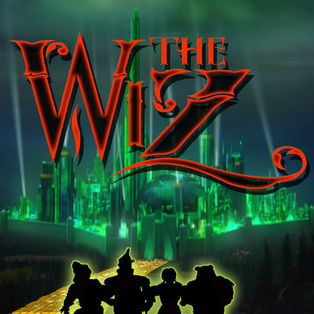 Everyone knows the story, but now it's a new fantasy for today -- mysterious, opulent and fanciful!

Dorothy is swept up by a cyclone and transplanted to the land of Oz — landing on top of the Wicked Witch of the East; the puzzled Dorothy is greeted by munchkins who sing to her about the Wiz, a powerful wizard living in Emerald City who can help her get home. On her journey down the yellow brick road, she encounters a garbage-stuffed scarecrow in a junkyard, a broken-down tin man caught in the decay of an old park, and a cowardly lion posing as a stone statue. The quartet faces numerous obstacles including a gaggle of motorcycle henchman on their way to the Wiz — who orders them to kill the Wicked Witch of the West (a sweatshop tyrant) before he will grant their wishes.

Spotlighters is thrilled to debut a new work by local playwright, Rosemary Frisino Toohey.   Join us for the first staged reading of this work and follow the development of this fun and exciting work from first reading to full production in July 2018!
Judy and the General is Rosemary Toohey's hilarious new musical about the biblical Judith and the powerful general Holofernes. Her image is in museums and churches all over the world.  Hundreds of artists through the years have depicted a young woman in the act of beheading a bearded general.  It’s not often that women are seen as heroes in the Bible, but among the handful of strong female characters, Judith is a standout.  Intelligent, devout and resolute, she ingeniously uses her feminine wiles to outwit the mighty Holofernes, thereby saving her people from destruction.  It’s a classic match between the forces of good and evil.
The story of a woman who takes it upon herself to save her town from impending destruction, and the indecision of the male dominated leadership!
ALL Tickets just $12 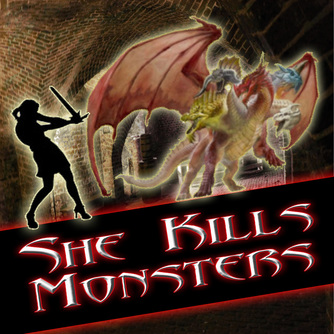 SHE KILLS MONSTERS
by Qui Nguyen
directed by Stephanie Miller
May 26 - June 18, 2017

A comedic romp into the world of fantasy role-playing games, She Kills Monsters tells the story of Agnes Evans as she leaves her childhood home in Ohio following the death of her teenage sister, Tilly.  When Agnes finds Tilly’s Dungeons & Dragons notebook, however, she stumbles into a journey of discovery and action-packed adventure in the imaginary world that was Tilly’s refuge. In this high-octane dramatic comedy laden with homicidal fairies, nasty ogres, and 90s pop culture, acclaimed young playwright Qui Nguyen offers a heart-pounding homage to the geek and warrior within us all.
​

"Packed with action, wit, and a sizable nerd-quotient, the production is a delight from start to finish" - Theatremania 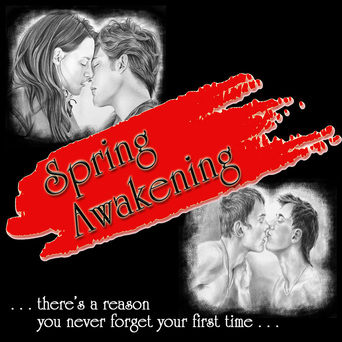 Headstrong Melchior and naive Wendla stumble into each others’ arms, passionate and curious; while anxious Moritz struggles to live up to the stringent expectations of society. With only each other for guidance, this group travels the fraught and rocky path of adolescence, discovering their bodies, their
minds, and themselves along the way. An electric, vibrant celebration of youth and rebellion, Spring Awakening fuses issues of morality, sexuality, and
rock and roll into a story that packs a powerful emotional punch.