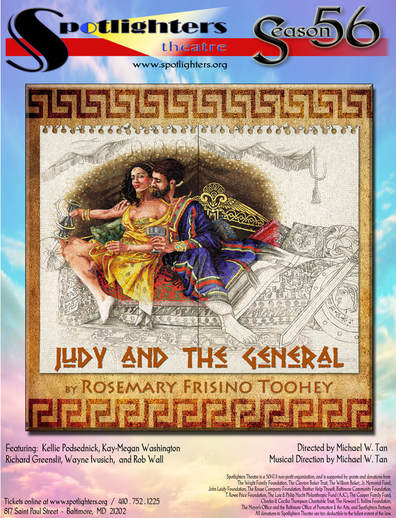 The Book of Judith may not be one of the more well-known books in the Bible but the image of the beautiful Judith decapitating the Assyrian general, Holofernes has been depicted in countless artistic mediums. The latest in these depictions is Rosemary Toohey’s new musical, Judy and the General, which is making its world debut at Spotlighters Theatre. As other composers such as Stephen Schwartz and Andrew Lloyd Weber have done before her, she has taken a Biblical story and honored its message but by including deliberate anachronisms (for example, did you know that Judith was a vegan?), she manages to make the story appealing to a younger, more modern audience. This helps to affirm that Judith’s legacy can cross generations and she can be just as relatable to 21st century theatregoers as she was to her fellow women in the 1st century B.C. A strong, independent woman who thinks outside the box and defies convention will always provide a story worth telling.

Judith, or “Judy” as she is usually referred to in the musical, is a beautiful young woman who wants something more than her humble, unexciting life helping her father on his farm. She believes she has found happiness when she marries Manasseh but after his untimely death, she begins to reexamine her life and becomes more independent. With some help from her trusty maid (who in addition to being the narrator is also the only other female character in the musical), she manages to forge her own identity and heroically saves the city of Bethulia. This sounds like the plot summary of a biblical epic movie on the same scale as The Ten Commandments but Toohey has managed to make it work as a musical with a cast of five. This approach along with the deliberate anachronisms makes the story fun and more intimate but at the same time, we do not forget about the large stakes that are driving the plot. For example, when we first meet Holofernes, he greets the audience with fist bumps but at the same time, Toohey never downplays or anesthetizes his viciousness or cruelty. He may be played for laughs at times but this is not a man to take lightly.

Toohey makes the important decision to present the story to us through the eyes of Judith’s maid. We may never get her real name (Judith calls her Fallacia, but she does not care for that name), but it is her insight and commentary that drives the story and she is also an important character within the story itself, playing a Watson-type role to Judith in the climax. The maid is snarky but understanding and is much more of an everywoman than Judith, making it easier for the audience to relate to her and feel like they are being addressed by an equal. Toohey knew that for the audience to get the full perspective of Judith, they would need to see her from the perspective of someone who is lower than her on the social ladder to give an idea of how Judith treated her inferiors as opposed to her equals. It is through her eyes that we see Judith grow from a girl who is well-intentioned but inconsiderate of her servant to a mature, thoughtful woman who puts others’ needs before her own.