Check out what's happening this month! 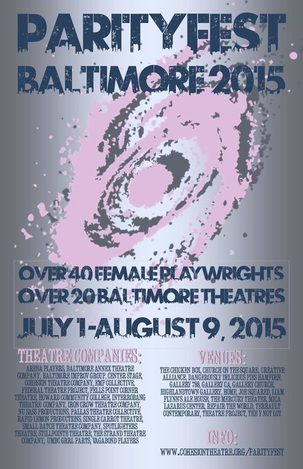 ParityFest Baltimore 2015,    a city-wide readings festival aimed at increasing gender parity in the arts!  The List, a compilation of the most recommended new and under-produced plays written by female playwrights. Cohesion Theatre, working with The Kilroys, is coordinating a festival of readings of all of the 2015 plays (likely 45 in number) over the course of six weeks, which will be complemented by workshops on gender issues and discussions with playwrights, actors, directors, designers, and cultural leaders.
For more info - http://www.cohesiontheatre.org/parityfest/
For the current schedule of readings - http://www.cohesiontheatre.org/parityfest-schedule/
Readings at Spotlighters:

Thur, July 30 - 7:30pm
THE GHOSTS OF LOTE BRAVO -
Synopsis: Raquel has been beaten, raped, and left for dead in desert of Lote Bravo. La Santa Muerte enters and cradles her head, the end is near. But at home her mother is pulling fate by the other end of the string, she is desperate to find her daughter. She tries the corrupt and inept police  department to no avail. Her co­-worker,  Camille, gives her a statue of La Santa Muerte and the  advice to ask her for help. That night, in her one room shack, after tucking the younger children and into bed on their mattress she evokes the goddess' help. La Santa Muerte appears and leads Juanda on a journey of discovery, where she watches the tragedy unfold.
Each night she is warned by the spirit that "you will learn things that cannot be unlearned" and that "these are visions that drive many to insanity."
Will Juanda continue? Can she continue? Whose force is stronger, a mother's love or the sheer will of death?
Overlaid beautifully with this tragic tale is also a Folktale that seamlessly bridges the gap between harsh reality and lasting beauty.
- directed by Fuzz Roark.   - written by Hilary Bettis
Thur, Aug 6 - 7:30pm
I WILL BE GONE - After the death of her mother, Penelope moves to her mom's hometown of Bodie - a small, California town whose lively years as a gold rush settlement are far behind it - to live with her aunt Josephine. As Pen learns more about her mom's old friends and old stomping grounds, the citizens of Bodie must confront the ghosts from their own pasts.
- presented in cooperation with the Young Actors Academy.  - written by Erin Courtney 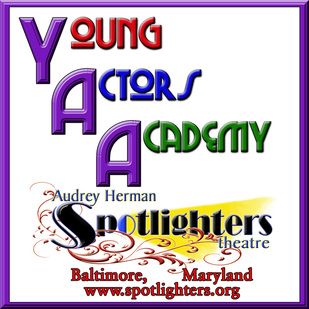 Don't miss this exciting opportunity to see (and support) our future theatre artists!
Tickets are available online at www.spotlighters.org
Running Time:  One Hour and Thirty Minutes, NO Intermission.

Check the performance information for specific dates and times.

LOBBY opens one hour prior to curtain, with seating approximately 30 minutes before curtain.
Late arrivals will be seated at the discretion of Stage Manager/House Manager.
In some productions, Late Arrivals may not be seated until an Intermission.

A copy of the current financial statement of The Audrey Herman Spotlighters  Theatre is available by writing Mgr Director - Spotlighters Theatre, 817 Saint Paul Street;
Baltimore, MD 21202 or by calling 410.752.1225. Documents and information  submitted under the Maryland Solicitations Act are also available, for the cost
of postage and copies, from the Maryland Secretary of State, State House,  Annapolis MD 21401, (410) 974-5534.