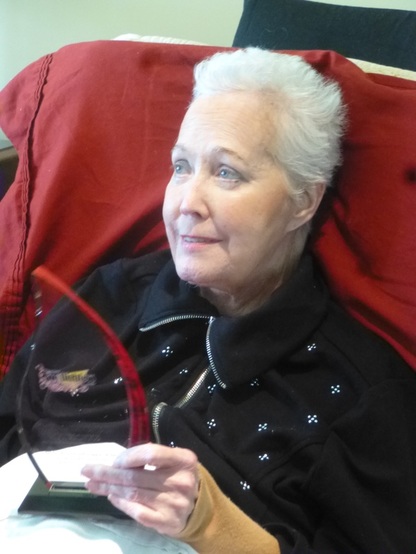 The 2015 Audrey Herman Celebration opens the 54th season (2015/2016) of Spotlighters Theatre.  At the event The Audrey Herman Award for support of the arts & theatre will be presented to Dr. Maravene S. Loeschke, former president of Towson University for her work in expanding arts & theatre across Baltimore!  The Spotlighters Award will be presented to Alan Zemla for his volunteer efforts at the theatre.

The Audrey Herman Celebration will be held on 5pm, Sunday, October 25, 2015 in Edinburgh Hall, at The Grand (225 N Charles Street, 21202).  The evening will begin with cocktails (cash bar) at 5pm following by dinner at 6pm.  The evening will include a Silent Auction from 5p until 9:45p; with Awards Presentation, Entertainment and Dancing starting at 7pm.

The Audrey Herman Celebration is a night of recognition, celebration and fund raising, especially as the theatre begins to plan for relocation to a larger permanent home.  Tickets are $100 for the Auntie Mame ticket (a $35 donation), which includes a private 5pm reception with the honorees and the Spotlighters Theatre board of directors.   The Dolly Levi ticket is $75 (a $10 donation) and includes cash bar, dinner, presentation, dancing and entertainment.  Cocktails start at 5pm, with dinner being served at 6pm in Edinburgh Hall, at The Grand (225 N. Charles Street, 21202).  Tickets may be ordered online at www.spotlighters.org or by calling 410.752.1225.

Spotlighters is thrilled to recognize the work of Dr. Maravene S. Loeschke.  Dr. Loeschke included a biography of Audrey Herman in her book, Lives in Art: Sixteen Women Who Changed Theatre in Baltimore.  Dr. Loeschke was presented the Audrey Herman Award in an early presentation, on June 13, 2015 at her residence at Blakehurst by Spotlighters Theatre Board President, Y. Maria Martinez and Managing/Artistic Director, Fuzz Roark.  She was proud to receive the award and remarked what a happy time it was for her.

Dr. Loeschke was the 13th president of Towson University and the institution's first alumni president in 65 years.  A Baltimore native, Dr. Loeschke spent more than three decades at Towson University climbing the faculty ranks ultimately becoming dean of the College of Fine Arts and Communication before leaving in 2002 to serve as provost of Wilkes University and president of Mansfield University in 2006. Throughout her career in higher education, Dr. Loeschke has focused on the leadership development of students, faculty, and staff. Although Dr. Loeschke chose to follow a career in higher education, she has an extensive professional theatre background. She has performed many roles in the Baltimore area including 4 one-woman shows. Dr. Loeschke holds a master's in education and a bachelor's degree in theatre and English from Towson University, and a doctorate in philosophy from the Union Institute in Cincinnati. Dr. Loeschke is the author of three books, a monograph, and numerous scholarly papers and articles. In 2013, she was named among The Daily Record Maryland’s Top 100 Women and the Baltimore Sun's 50 Women to Watch.

About Spotlighters Theatre -
Spotlighters has been a leader in the Baltimore Theatre community since 1962, and is the third oldest (continually operating) theatre in Baltimore.  Vagabond Players is America’s oldest community theatre, followed by The Arena Players, America’s oldest African American community theatre.  Spotlighters produces 8-10 main stage productions each year, offering multiple opportunities for local talent to refine their stage skills, as well as regional technicians and designers to prepare for professional careers in theatre.  Spotlighters also offers an intensive five week summer theatre program for students in grades K - 12.  As a 501-c-3 non-profit organization, Spotlighters exists at the pleasure of our patrons and donors

For more information about Spotlighters Theatre or to request photos for the event.
Please email Fuzz@spotlighters.org or call 410-752-1225.
PHOTO CREDIT:  Linda Chambers /  Chris Aldridge of CMAldridgePhotography.com