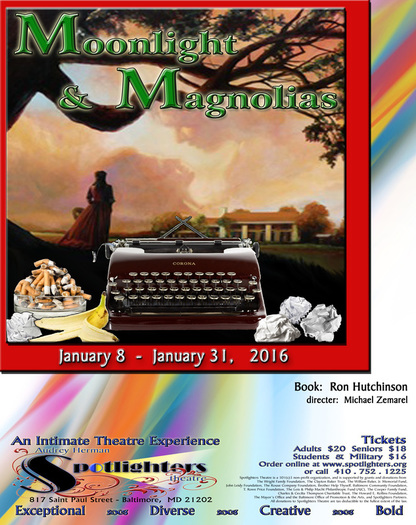 "Moonlight and Magnolias" at Spotlighters Theatre is a lot of fun. Since I don't usually care for historical fiction about the making of some other work of art, I was very pleasantly surprised by the wit and the energy of this production.

If you enjoy the Golden Age of Hollywood, and have some familiarity with the movie, "Gone with the wind," this should be a laugh-out-loud experience for you. The first half of "Moonlight and Magnolias," is particularly humorous.

A chief source of information for "Moonlight and Magnolias" is the autobiography of the real-life Ben Hecht. Hecht informs the reader that David O. Selznick shut down the filming of Gone With The Wind. Selznick hired Hecht, a famed script-doctor, to write an acceptable screenplay. Selznick also fired his first director, George Cukor, and replaced him with Victor Fleming (who had not quite finished The Wizard of Oz). While everyone else in the idled "GWTW" production anxiously waited, Selznick, Hecht and Fleming worked 18 hours each day for seven days to finish the revised screenplay. Since Hecht had not read Margaret Mitchell's lengthy book, Selznick and Fleming acted out scenes from it for the script doctor to write. Hecht's autobiography also mentions his dislike for Victor Fleming, which is a source of humor in this play.

The cast is really good. This is community theater, but don't tell that to the actors in this show. In order of lines spoken, these are the players:
Thom Eric Sinn as David O. Selznick
David Shoemaker as Ben Hecht
Tony Colavito as Victor Fleming
Rachel Roth as Miss Poppenghul

Portraying the legendary 20th-century film studio executive David O. Selznick would seem to be a difficult task. Nevertheless, Thom Eric Sinn makes it appear easy. There is never a moment when Sinn seems to surrender the idea he couldn't be Selznick. Sinn provides all the passion and ambition that his great role requires.

"Moonlight and Magnolias" needs a strong Ben Hecht. David Shoemaker's Ben Hecht is excellent. I have seen every single performance by Shoemaker that is listed in the program notes. He continues to improve with every new role he takes on. With his above-average looks and his insouciant, sometimes self-deprecatory delivery, his stage presence is very interesting to observe.

Tony Colavito's Victor Fleming is also wonderful. I have attended many of Colavito's plays, and the quality of his voice is always pleasant to hear. Victor Fleming is a natural fit for him. Colavito has little trouble finding the megalamaniac, bully, company man and visionary that Victor Fleming was. Fleming's many confrontations with Ben Hecht are highlights of the play.

As Selznick's secretary, Rachel Roth has far less lines than the other three characters. However, she is good at being assertive; she walks in on the writing session as if the equal of each man. She also gets to physically restrain the exhausted Hecht from walking out, which is a great moment for feminism.

Mike Zemarel also does a fine job directing. The Spotlighters is unique in that it has a four-sided, 360 degree stage. Zemarel has managed to block the show so that the actors seem to be turning almost naturally.

Finally, congratulations to Fuzz Roark. Fuzz has been very busy with the task of relocating the Spotlighters. That hasn't stopped him from overseeing a very enjoyable stage production.

If you like Hollywood at its finest and are familiar with "Gone with the Wind," don't miss "Moomlight amd Magolias" at the Spotlighters. It will make you laugh, as well as appreciate the effort required to make a memorable film. 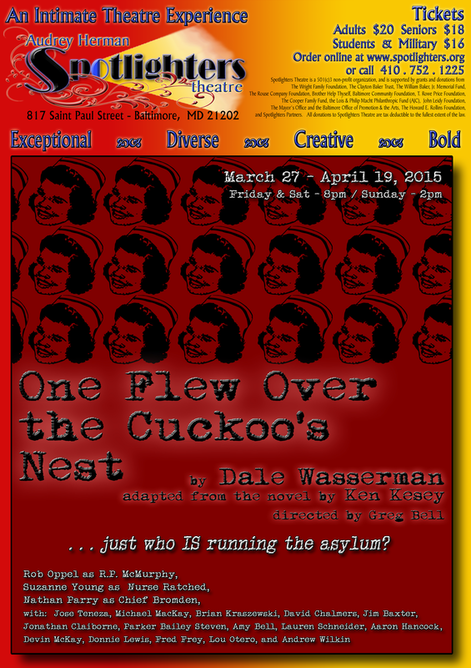 Spotlighters Theatre's production of "One Flew Over the Cuckoos Nest" is energetic, memorable and worthwhile. I attended last night's opening (3/28/15). The most striking characteristic is how well the "inmates" create the feeling of being in a real mental asylum. For those I haven't mentioned this to, I think the Spotlighters is a Baltimore, Maryland treasure. Located near the Mount Vernon Business Center, it is a 100-seat theater divided into four equal sections that for 53 years has been where thousands of actors and technical crew have improved their craft. Founded by the late Audrey Herman and now managed by the indefatigable Fuzz Roark, this is a hallowed sanctum where love of live theater is celebrated. It is a damn shame for Baltimore that the owner(s) of the building that has always been the home of the Spotlighters is planning a rent increase that cannot be afforded by this venerable institution. In the twenty-first century, nothing matters more than profit.

The Spotlighters website has a nice summary of the play: "McMurphy, a charming rogue who contrives to serve a short sentence in an airy mental institution rather than in a prison, learns he has made a mistake. He clashes with the head nurse, a fierce martinet. He takes over the ward and accomplishes what the medical profession has been unable to do for twelve years - makes a presumed deaf and dumb Indian talk. He leads others out of introversion; stages a revolt so that they can see the World Series on television, and arranges a rollicking midnight party with liquor and chippies. For his offense, the head nurse forces him to submit to shock treatment, and eventually she forces him to submit to a final correction - a frontal lobotomy."

From Ken Kesey, Author's book, Dale Wasserman adapted it for theater. It has a very interesting structure. Three kinds of people are depicted: Those who need rules placed on them, those who must administer them and those who reject authority altogether. One of the surprises awaiting McMurphy is realizing that his key companions in the ward are not committed--they volunteered to submit to a strict mental hospital life. As McMurphy struggles for freedom (for himself and his ward mates) it becomes clear that he is matched against a head nurse who similarly must be in control to function. There is a fascinating dynamic between the leading adversaries. A third principal, Chief Bromden, is a very sympathetic beneficiary of the conflict.

While remembering this is Community Theater (and not Center Stage or the 1975 movie One Flew Over The Cuckoo's Nest), I like the cast. I think the most interesting actor on stage is Nathan Parry, playing the Chief. He has a striking appearance. He has a face that seems to belong somewhere like Mount Rushmore. As the Chief raises his game, so does Parry. With Parry's aching performance we can really sense the mental torment his character is living with daily.

The actors playing the adversarial McMurphy (Rob Oppel) and Nurse Ratchet (Suzanne Young) are both technically fine. They don't make any real mistakes. However, both could benefit by elevating the nastiness quotient. I don't say this often, but a bit more hate between them would go a long way.

Meanwhile, the asylum is well represented. I was most impressed with three in particular: Brian Kraszewski as the cowardly Cheswick; Michael McGoogan as the stuttering, sexually hopeless Billy Bibbitt; and Jim Baxter as the spastic Martini. Having seen every cast member behave quite normally during the opening night reception, it is amazing the transformations made on stage as they become inmates of a mental asylum.

Greg Bell's direction and the rest of the production team are in fine form. "Cuckoos Nest" is another Spots production that enriches the viewer and production member alike. This is such a great show at a historic space. With their lease scheduled for expiration, heading down to their St. Paul location to see this is still a pleasant evening spent in Baltimore.
by Scott Loughrey (https://www.facebook.com/scott.loughrey)