NOTE:    We will not be able to seat late arrivals for the performance until Intermission.  Please plan to arrive at the theatre at least 30 minutes prior to curtain, and allow time to find parking in Mt Vernon.  Parking is on-street.  There are Parking Lots at Charles & Read Streets, as well as the SUN-Chesapeake Garage at Monument and Calvert Streets.  Thank you for understanding.
Please take 5-10 minutes to complete our ON-LINE Survey!  Thanks!
Your responses will help us know our patrons better, and understand your needs and desires for Spotlighters.
As we continue to pursue securing our new home, we will need to inform many organizations of who our patrons are, and how they support us. Thanks for participating!
AUGUST Special Events! 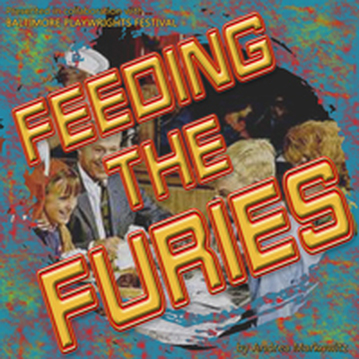 
​Aspirations run amok when Ruthie and Marty Furie set out to live the 1960s American Dream that glorifies upward mobility, domineering husbands, and obedient wives and children. While Ruthie and Marty busily keep up with the Joneses, their marriage is rife with conflict and they can’t control their counterculture kids. As we eavesdrop on the Furies’ hilarious restaurant conversations it becomes apparent they all hunger for more than what’s on the menu.

Hamlet, Prince of Denmark, is depressed.  His father, the king has died, and ... the ghost of his father haunts Elsinore; his uncle, Claudius, has married Queen Gertrude, his mother, and assumed the throne. When Hamlet meets the ghost, his dead father reveals that Claudius poisoned him—and the ghost demands that Hamlet exact revenge. In order to carry this out, Hamlet feigns madness; as part of his insanity, he scorns the affections of Ophelia, daughter of Polonius, to whom he had made romantic overtures.

While Hamlet, judging the reaction of Claudius, is convinced of the new king's guilt, he can't bring himself to slay him outright. Instead, Hamlet rebukes Gertrude with the news that she is sleeping with the killer of her husband. Unfortunately, Polonius—who is hidden behind a tapestry in the Queen's chamber, eavesdropping—panics and cries for help; Hamlet stabs him, thinking it is Claudius. Of course, when this news is given to Claudius, the King sends Hamlet to England with the ostensible purpose of securing Hamlet's safety and the recovery of his senses. Rosencrantz and Guildenstern, two childhood friends of Hamlet's who are now little more than spies for Claudius, are to accompany him. The trick is that Hamlet will bear a letter to the King of England in which Claudius asks England to sentence Hamlet to death.

In the midst of these events, Ophelia loses her own sanity; she is driven to madness by Hamlet's condition and the death of Polonius. Laertes, her brother, returns to Elsinore from his studies and vows his vengeance upon Hamlet for what the prince has done to his family. News is brought that Hamlet has returned to Denmark, much to the surprise of Claudius, and that Ophelia has drowned herself in a river. Claudius now plots with Laertes to kill Hamlet upon his return to Elsinore. Meanwhile, Hamlet meets Horatio, his best friend, and tells how he altered the letter so that the execution order was for Rosencrantz and Guildenstern instead of him. At the end of Hamlet's tale, Ophelia's funeral procession enters, and Laertes and Hamlet confront one another. Laertes challenges Hamlet to a duel. 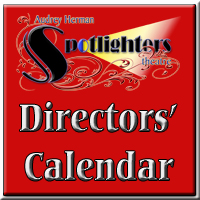 Our Mission:  To provide Exceptional, Diverse, Creative, Bold and Affordable Theatrical Productions, which entertain and stimulate both audience and artist.  Spotlighters strives to enhance and increase the Baltimore community's appreciation for, and participation in the experience that is live theatre.

Check the performance information for specific dates and times.

LOBBY opens one hour prior to curtain, with seating approximately 30 minutes before curtain.
Late arrivals will be seated at the discretion of Stage Manager/House Manager.
In some productions, Late Arrivals may not be seated until an Intermission.

A copy of the current financial statement of The Audrey Herman Spotlighters  Theatre is available by writing Mgr Director - Spotlighters Theatre, 817 Saint Paul Street;
Baltimore, MD 21202 or by calling 410.752.1225. Documents and information  submitted under the Maryland Solicitations Act are also available, for the cost
of postage and copies, from the Maryland Secretary of State, State House,  Annapolis MD 21401, (410) 974-5534.