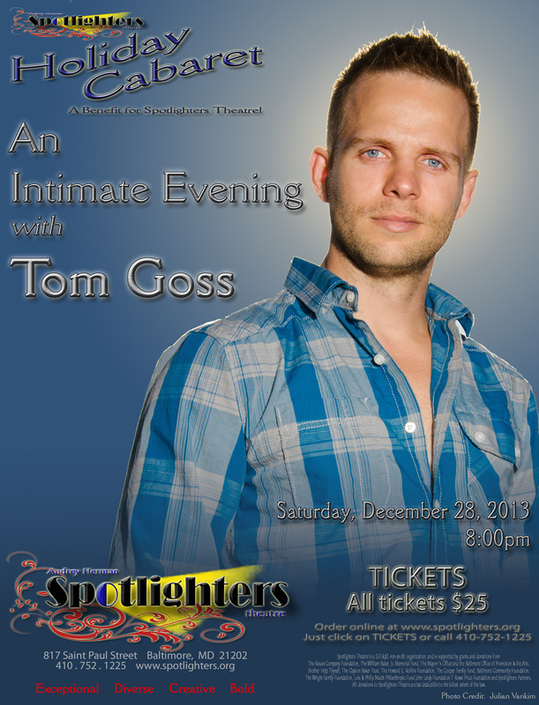 ONE NIGHT ONLY!
December 28th at 8pm
TICKETS  $25
A Benefit for Spotlighters Theatre

Tom Goss never set out to become a guitar-toting, power-pop prodigy with a  national fan base.  A Catholic kid from Kenosha, Wisconsin, Goss had set  his sights on one day becoming a priest. In 2004 this path took him to  Washington, DC where he entered the seminary. Things didn’t go as planned and  Goss eventually put down the collar and picked up the guitar. It should come as  no surprise then that the music he makes is a mix of internal struggle and  hopeful spirit. Goss earned his chops in the DC coffee shop scene and has since  traipsed across the country (both on his own and with his band) in his  trade-mark flip flops to spread his easy-going gospel.

Goss’ music often gets compared to acoustic-pop peers such as Jason Mraz and  Jack Johnson but it is his lyrics that have propelled him to serious  singer/songwriter status. While radio-ready, full of hooky melodies and plenty  of romance to go around, Goss’ music reaches out to those looking for something  deeper than your standard love song. A track off his second album, “Back to  Love,” called “Lover” (a song that hit heavy rotation on MTV’s Logo) features a  video that tells the story of a soldier killed in Afghanistan while his partner  waits at home. The video stars servicemen who were discharged under the recently  abolished “Don’t Ask, Don’t Tell” policy. Goss’ outspoken stance and his  personal life (he married his husband Mike in 2010) have earned him a  considerable following in the gay community, but his music appeals to anyone with a taste for power-pop and an appreciation for meaningful lyrics in the
singer/songwriter tradition.